I have been reading about the Dravidian culture for a long time now. As I’m part of the single largest and native Indian society, I started digging the roots of Hindu religion in India.

Indus (Sindu), Hindu, Hindustan, India and Indo are all words referring a river, religion and region or the country in Asia. While all of the above sounds similar, I doubt the nativity of these words as authentic Indian words. The reason being the ones

With the above three theories, looking at Hinduism and its domination in India is only seems like alien religion. If then, what was the religion in India before Aryan’s invasion?

Undoubtedly, it was the nature and king worship. This is proven as even today the south sides of India have many non-Hindu related Gods are worshiped. As per Hinduism the worship of God has been extended by a community of people called Brahmins. Where in the non Hinduism based God worshiping in South India requires no Brahmin community for their God worship. Such Gods are called

This states the true side of ancient Indian religion as non idol worships and followed the warriors of various time periods.

I recalled all my collection of data after visiting a Ayyanar temple last weekend ;-) 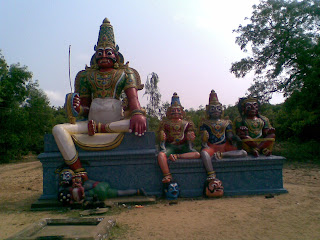 It was my younger son's pre-school annual day a weekend before the last week. The kid was always saying something about the annual day celebration with his language.

I got a call from the pre-school principal saying that my ward is participating in an annual day event, I was surprised and excited to know what can be a possible event a two and half year old boy can participate ? The incharge of the school also told me to drop him a day before to the annual day for reharsals for the event. hmmm that was an addition cup of tea for my excitement.

The day has come I went to the school with my son four hours before the event and even that time the school people didn't tell me what is the event my son was participating. I went back to home and got my family along to attend the annual day celebrations.

The very first program in the event was the pre-school kids dance, I should say it was ramp walk. The small little cuties lined up one by one with green colored dress and big fruits softtoys attached to the dress. I first noticed a kid with tomato looked like my ward, started clicking the pic and found I was wrong ;-) 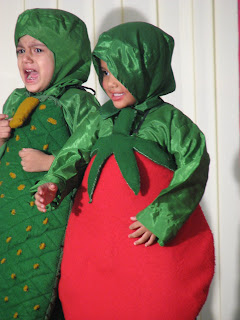 I saw another kid with banana toy .. oh yeah it is my son Adhava for sure... 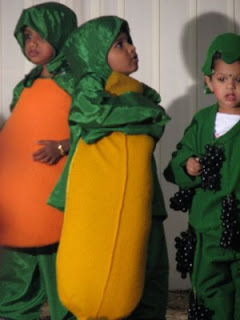 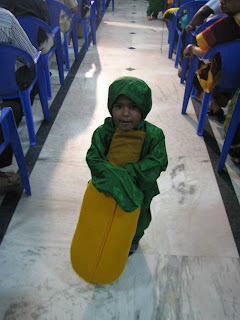 It was really happy day for all of us, and my elder son had a great day too as the school was his ex-school and he did know all of the people around. 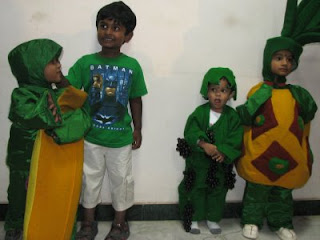 Just a quick video from my still camera here: