During the Barbeque party on Friday, after one of my friend told me about the river valley next to the park. He also hinted to see me the activities around the river valley and stated that this is how most of the river side valleys in Japan have been used. I was excited and took my camera and walked away from the party place. 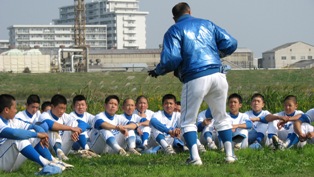 Actually the river was in the other side of the road, where the road was constructed in an elevated place in between the park and river. Hence I climbed up on the steps to catch the road and crossed it to go down in to the river bank valley. The river was bit away from the road but the valley was filled with lots of games and sports by people. I think that was a internet school base ball tournament, colorful uniforms wear children playing the baseball and their coaches around boosting them on the game. We in India do not have the game Baseball but Cricket the one which is most famous and crowd grabber sports in India. However for me except the bat nothing seems to be different as I don’t know either Baseball or Cricket.

In the other side of valley I could see some youngsters playing saucer the foot ball game, in between these to activity area in the plains a person with a Golf hitting the rough ball, unfortunately he didn’t have anybody to collect and return his balls.

I went near to him to take some pictures of Golf but after seeing me, he stopped his play and started staring at me.
I don’t know why but seems he didn’t like photographed I guess, however I had many other opportunity on the ground hence moved after quickly.

I was looking at each sports by small kid to an old man and passing on the valley area. Finally I reached the destination river where couple of people using their fishing rods with reels fitted awaiting for their collection of fishes from the river. Since the sun was bit harsh on the day,

I couldn’t click much or better pictures of the fishing stuffs but my disappointment was not lasted for long time. The river banks also had a yellowish followers with lots of Honey Bee flew on it for honey extracts, one of the Bee has reacted well while I clicked him on my camera with Super Macro enabled.

At the river I saw some jet skiis ahead, it was a Friday morning and I really enjoyed looking the jet skii sport is fun on the river parting my daily rush hour commute in the subway trains. After clicking some of their adventure on my digital black box, my foot urged me to walk back to the BBQ area. My return path also pushed me to the circle of surprise as I have seen the first remote controlled miniature flight squeezing the air on top of my head. 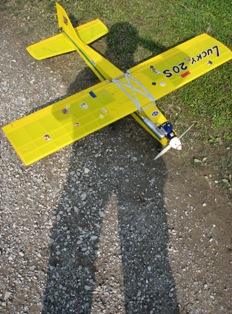 It reminded me of my childhood days, I had always wanted to become a pilot :-), and it never happened. I could only fly as a traveler in many flights. My memory shadow traveled on the same miniature flight to catch those undeleted sweet days on my brain cells. I ran and rushed near to the person who operated the remote control, the flight was brought into the valley of the river on a bicycle by a person, I tried to learn the operational instructions from the person, but my unfortunate he couldn’t speak English but managed to get his pose along with the flight. For my request to take picture with him and his flight he landed the flight from the sky, my travel back to the past also landed to the reality along when he landed the flight. My hunger stomach urged me to go the BBQ.