Actually I was wondering about the many Japanese cultural activities which are looked similar to me with those of Indians. In a way that is truth too, because of the Buddhism which spread to the world from the origin India. Other examples which proves my theory of understanding are the Sanskrit word usage in Buddhism even in Japan, The pagodas of various countries and the portable shrines etc. While I visited the Asakusa of Tokyo and Ueno park in the recent past, I have decided to learn more about the Pagodas hence this blog got its shape.

A pagoda is one part of a temple's structure, and we can trace the origin of pagodas back to Great United India. A pagoda has its origin in old Indian culture. The Indians made pagodas as tombs called stupa, before Buddhism began, but the shape of it was completely different from a Japanese or Chinese one. "Stupa" is from a word which means "to accumulate" in Sanskrit, which is the ancient language in India. Its shape was like a dome, and most of them were made from soil or stone. Pagoda was a modification of the stupa 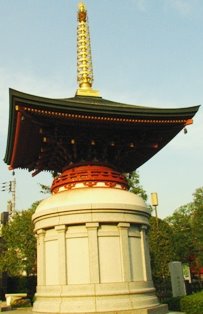 The wooden pagodas are the building with scientific ideas, each story [floor] of pagoda helps to prevent the rainwater falls away from the base of the tower, In addition the cascading of pagoda conical roofs helps preventing the rain water force from top to bottom which may cause earth slides.

A pagoda structure is running down the centre is a giant pillar of tree wood. Around this wooden pillar, the conical roofs are loosely packed, resulting in a highly flexible structure able to withstand earth tremors. This could be a main reason for the countries like Japan, Thailand, China are built many pagoda structure for the religious temples, where the earth quake are common.

The oldest and tallest wooden pagoda in the world is located in China and it is celebrating its 950th anniversary. This pagoda is called as Sakyamuni Pagoda in Yingxian in north China's Shanxi Province built in 1056. 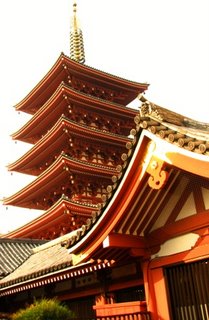 Pagoda style buildings are not only by Buddhist also Hindus and Shinto religions were build for the temple structures.

It is pertinent to explain the terms “pagoda” “Zedi or Ceti” and “Stupa” all of which refer generally to a Buddhist monument of a solid type. Pagoda is a transportation of the original Pali word “dagaba” (dhatu-gabha) meaning a sacred mound containing the mortal remains of the Buddha or saints.

The oldest pagoda which still retains its original size, shape and design is one of the three at Sre Kestra, an old Pyu City State (1st to 9th century A.D) near the modern town of Pyay about 180 miles to the north of Yangon, Myanmer(Burma). The three Pagodas are the Baw Baw Gyi, the Phayamar and the Phayagyi, all in cylindrical shape, simple, plain and entirely undecorated. The last named, Phayagyi is believed to be the oldest of the three. Oral history and old chronicles claim that they are the surviving ones of nine stupas which king Duttabaung the founder of Pyay dynasty built in his kingdom.

I sincerely thank all the original contributors of most of the Pagoda related content seen here. Visit me at: http://www.camera-friendly.com

Amiable dispatch and this fill someone in on helped me alot in my college assignement. Say thank you you seeking your information.

It is useful to try everything in practise anyway and I like that here it's always possible to find something new. :)