Okay, let me summarize my experience in walking on the rainbow bridge, which happened yesterday as mentioned in my Untitled Day Blog.

One of the major attractions of Tokyo is the Rainbow Bridge which connects the Tokyo to Odaiba. Let me describe the approach to the bridge normally it comes end of the article, but for the user comfort I decided to post it here. One can travel on Rainbow Bridge by motor vehicles on the double deck roads or by Yorikamome unmanned trains or by foot. You know now I’m going to write about crossing the rainbow bridge by foot. 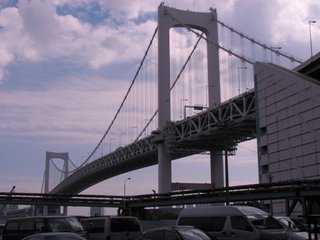 Okay now come to my post, In the Edo’s period [1603-1868] of Japan the man made island odaiba has been created, I wonder their ability to create such a big island on the sea without today’s most modern technology equipments. There used to be water bound transport to the odaiba for long time. Now the odaiba is connected to Japan via, underwater roads, and underwater trains and over the rainbow bridge with road and Yorikamome transports.

Yorikamome while traveling from Shimbashi station to Daiba station. Take a short walk say 10mins from Shibaura-futo station to the Rainbow bridge entrance. If you confused with the directions you can always seek the assistance of the Yorikamome staff that are really keen in helping people at the stations. When it happen to me, inspite of my language problem the staff came along till the station gate and showed me the way to reach Rainbow Bridge. Near the entrance board there was a ash tray for smoking but normally very less crowded or sometimes one or two people get into the rainbow bridge by foot. Hence the entrance place is not at all having the human smell. So, we decided to smoke at the entrance, immediately some helicopter on top of our head looking at us and rounding on the sky till we complete the smoke. I hoped it was a security or police helicopter to monitor unwanted activities on the bridge. But later we started walking towards the entrance the helicopter moved away. 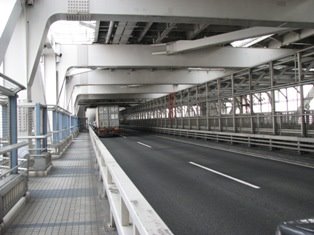 first deck with the road. From there you’re walking starts on Rainbow Bridge. Actually the rainbow bridge could be dived in to three civil structures one is the road supported by concrete pillars which actually the connection points to the bridge, second are the connection between the concrete pillar holding roads to the main support pillars [the 2 giant steel pillars] and the third is the place which is floating with the stay wires of the two giant steel pillars. Since we came via the elevator directly to the 7th floor building to start our walk we have straight landed in the connection structure between concrete and steel pillars. Due to the civil construction technology this place was really floating. Whenever there was a truck passing by the bridge shakes heavily creating a scary feeling in the mind, as I was going to cross the entire bridge over the sea.

We were slowly started moving on the bridge looking at the beauty of artificial important of the human world. It was totally a different experience for a person who came from the natures bed India. The sides of the bridge were protected with steel nets against anybody falling from top or other accidental prevention purposes. 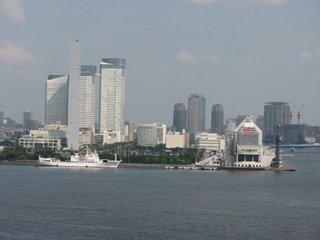 While moving forward the walk gave me a excellent view of waterfront area. In a short while I have reached the main steel pillar that area the pedestrian path goes little out of the core bridge 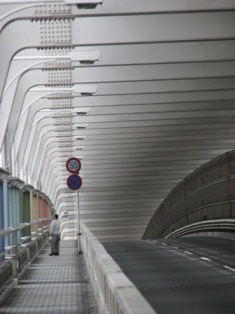 and goes rounding the pillar. There they have made some window to look outside and photograph the city. It was really cool. When our foot touched the main bridge area it was present experience to see the Yorikamome lines covered in a caged tunnel setup and trucks passing on the deck. Also looking at outside the bridge you can point huge ships and boats passing through under the bridge a must see seen.The ceiling of 1st deck inside the bridge is too good texture for photography purpose. While I was walking over I have seen several photographers carrying huge and hi-fi camera kit along. I had only my tiny Canon PowerShot S3 IS, as I have started to shoot my first digital photographs. But I was amazed with that little camera’s performance; in fact it convinced me a migration is mandatory from film to digital now.

Later about 30 minutes walk with photography I have reached the second main pillar, and then we moved to the final part of the bridge. Soon after few foot distance there was a steps from the pedestrian path going under the bridge. I was wonder whether it is for public to use or for some other technical issues they have it there. Because I couldn’t read anything over the board as it was written in Japanese Kanji. Anyhow I somehow changed my mind and started stepping down to the steps, finally after reaching the bottom part of the first desk I found that it is made for crossing the bridge from one side to another used by pedestrians. This subway setup reaching the other side of the bridge’s pedestrian path; however from the same point the pedestrian’s path started parting from the main bridge and forms a new pedestrian bridge. I could see now several smaller and bigger bridge branches are start parting from the main bridge.

Now I almost was reaching the end of the Rainbow Bridge spending about an hour over the bridge. It was landing in the Daiba; the landing area has a gate with a security personal sitting on a booth. You can obtain some information about the Rainbow Bridge over there. I think it’s for a person who starts from Daiba to walk on the bridge.

As I have stated in my initial paragraph Daiba is a man made island. When build they wanted to use these islands also a protection area to protect the City against attacks from the sea. We all know the history in the ancient days the oceans or sea oriented wars are the most common and important in the history. Hence they have built the forts to protect the city from Odaiba [In Japanese it means Fort]. One of the old fort is still exhibited near the landing area of rainbow bridge called Odaiba kahihin [see the picture]. 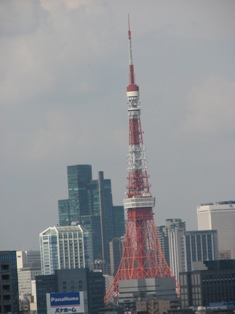 The scenic view of Tokyo city from the Rainbow Bridge is providing enormousness fun. Looking at the Tokyo tower from Tbe Bridge is too good. I liked the way these people organized the walk path of the bridge. Whatever the Japanese and Nature always has contrast and the war between artificial and nature is always happening here.

I hope blog gives some insight of Rainbow Bridge walking experience, to encourage me visit: http://www.camera-friendly.com