Yesterday, after I decided to go out to Tokyo Tower in the evening , I packed the Kenko binocular in my bag along with the Canon Powershot S3 IS. I took the subway train to Akabanebashi a Station, which falls within 500meter distance from the Tokyo tower. Though I had seen the Tokyo tower from distant places like Rainbow Bridge and Daimon etc. the first sight of the tower from Akabanebashi station exit was a great experience. It is really tall and looks gigantic.

I wanted to do some night photography with the Tokyo tower’s illumination. The Akabanebashi station has the guide map showing the

directions of reaching Tokyo Tower. But the exit information was not so clear surprisingly; hence I requested the help from the station staff, who showed me the exit path for reaching Tokyo tower. I reached the station exit by 5:00pm and the tower was already illuminated. But with the skylight it was not so clear, however as I wanted to roam around near the tower for some more time , I hoped to to take some snaps while returning.
After 5 minutes walk I reached the Tokyo Tower, but this time my experience was not so great. I was expecting it to be installed on a huge vacant land and having a good view, but my expectation was wrong. The Tokyo tower was actually in between residential and commercial apartment complexes hiding its full view in a congested area.

So to take a full view photograph I would have to go to the foot of the tower, which may not be real good. In my mind before reaching the Tokyo Tower, I was comparing the Tokyo tower with the Eiffel tower as I have seen some movies and picture of the Eiffel tower with the good landscaping. I think that could be a major reason for the Tokyo tower not being categorized under the major tourist attraction in the international community. 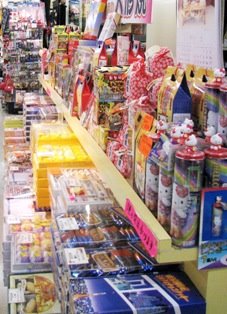 After moving front, back, down, up and various angles to get some view of the Tokyo tower with our tiny little camera, I failed in getting the wide portrait angle of the tower. Oh forget to tell I had some of my friends along with me to just have some Deepavali spice on that day.

In the bottom of the Tokyo tower, the tower maintenance people have built a single storied shopping complex covering the entire foot space between all the four legs of the tower. But I felt they should have not done it, as it spoiled the tower’s look . Before our entry to the tower complex, the sky light lost its color and turned dark. We then moved into the shopping complex to browse through the items inside. 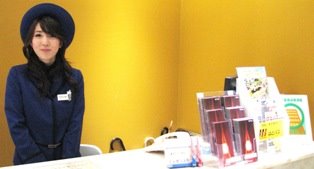 In the entrance of the complex right side, you can see a small reception, and with a girl sitting for helping visitors with information. Good thing is that you will be able to get Engilsh guide 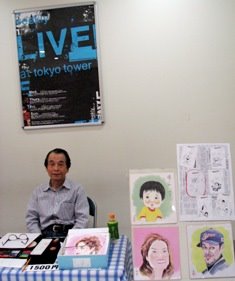 about the tower. I requested the receptionist to pose for my camera real quick, she accepted my request instantly. And most of the shops in the complex are selling the souvenirs. One can see items ranging from Ninja swords to pens. The ceramic pots used for sake drink with Tokyo tower printed also attracted the local crowd. I liked those small dolls of Ninjas and Japanese girls wearing kimonos but the prices are like Tokyo tower only, reaching the sky. The same dolls is priced less in the Akihabara area. Anyway being a tourist spot I was expecting the price tags in that range. Then there are lots of snacks shops and restaurants in the complex. There was a Mc. Donalds, an Italian pizza and some ice cream shops and some more Japanese food courts were in operational in the complex. Those food court's costs of food is same as outside. There were also cartoonist and caricaturist doing their artistic contribution for few yens of creating portfolio of the visitors. 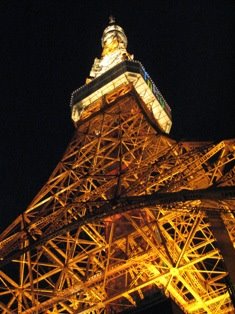 There was a lift corridor which takes the people to the top of Tokyo tower, but I decided to not enter in, due to the foggy atmosphere outside the tower. There was no hope to see anything outside attractive and also it was in the evening, so I couldn’t use my binocular. May be at a later date, I will come back to go to the top of the tower to see the Fujiyama Mountain [Mt. Fuji] However the current trip turned like a shopping visit, as the entire base of tower was filled with various shops and we spend more time in the mall just looking at the items :- )

I had a chance to taste some Japanese dishes in the complex, I have no idea on the name of it, and it was made with rice and egg omlet with it. After while we were walked out of the complex and started getting more snaps of the tower. The tower light was bright orange and was beautiful on the night. In fact the nearby apartment complex side wall’s glass windows were partially reflecting the towers lighting, a good show. I didn’t have my Tripod with me, because the one I have here is the heavy used for professional works, carrying that for a small digital camera may look awkward. But without tripod taking night photography is nearly impossible. But I managed to take some no so good pictures of the Tokyo tower by laying the camera in the floor etc.

After a few hours we moved toward the Akabanebashi station to return to the apartment.